Science Conference here on the Microsoft campus. This is an internal-only event that brings together our data scientists and engineers interested in advanced analytics, including machine learning and the end-to-end data science process and real-world applications that are leading to intelligent new apps and new insights from our ever-expanding universe of digital data. (If you don’t understand that description, that’s okay–it’s enough to know that machine learning and data science are very hot areas for Microsoft and other technology companies right now.)

This event has grown in popularity each time we’ve held it, and this May our attendance number of 1,706 was double the number of people who attended the event last October. We had more than 80 different talks and tutorials, as well as two executive keynotes, a tradeshow-like reception where more than 60 projects presented their work, and an onsite data science consulting service. As the community manager for our internal machine learning community, I look at this conference as an “anchor” event for the community, and the best opportunity for our members to get together face to face with so many of the people they work with virtually throughout the rest of the year.

Planning, organizing, and delivering the conference would have been impossible to stage without the active participation of many members of the vibrant machine learning and data science communities that we have here at Microsoft. This was my first time leading a conference effort this large, and I learned 5 big things about community management as it relates to putting on an event of this size.

From a budgetary standpoint, this event was primarily sponsored by my business group. But while we had the money to stage the event, we didn’t have enough people to make the event happen. Also, there are other groups and communities at Microsoft whose audiences and memberships overlap with ours, and who had their own plans for events in this timeframe. Instead of “competing” with those other groups, I reached out to them, explained what we were trying to accomplish, listened to what they were trying to accomplish, and ended up working with most of them to create a combined event that concentrated all our efforts on one big goal.

In the end, seven other groups and communities of varying sizes co-sponsored the event and helped make it a success, with more than 50 people giving their time, expertise, and enthusiasm over the past few months. This mindset of inclusion and cooperation did make some aspects of the event more complicated to manage and track, but the return on investment–in the form of the talents of those 50-plus people–more than made it worth it.

2. Sometimes, you just have to ask.

One of the teams that helped out with the conference was a data science team that works with engineering teams around the company. When the time came for me to find qualified reviewers of proposals and experienced people to give feedback in speaker rehearsals, I didn’t have enough people lined up to do so, because the data scientists on my own team had commitments to Microsoft customers they were busy fulfilling.

So I reached out to Juan’s team and just asked, “Is there any way your team could help out since you have experience?” I got an immediate “Yes,” both because they wanted the event to be a success, and because they publish a journal of applied research, and saw the opportunity in taking part with reviews and rehearsals to discover great work to feature in the journal. This was a classic win-win situation, but we never would have discovered it if I hadn’t made the request.

3. It pays to know your superusers personally.

On the morning of the 2nd day of the conference, I got an urgent email from the videographer who was making a short “sizzle reel” video of the event. He needed someone to interview to give some context and voiceover to the video, and he wanted me to do it. I knew I was the wrong person, since (1) I organized the event, and (2) I am not a data scientist. I immediately I started thinking through who would be right for him to interview. It had to be:

It’s hard to describe what happened in my mind over the next 10-15 seconds; it was as if I took our 2500-person community and applied all these criteria, rapidly filtering down to two names out of the dozens or perhaps hundreds of possibilities: Ram and Esin. Ram is a security expert, and he runs a special-interest community focused specifically on machine learning and security. Esin works in our Bing Ads business, and she teaches a regular introductory ML class as part of our community. I looked at the event schedule, guessed which room each was likely to be in at that time, and went to track them down. I found them where I expected them each to be, they both agreed, and less than 90 minutes later the interviews were both done.

The time I had invested over the past couple of years getting to know Ram and Esin personally paid big dividends in this unexpected moment, and I have no doubt that the time spent getting to know other superusers will similarly pay off in the future.

Every time we published content out to the people who registered for the conference–whether it was a draft agenda, an online beginner’s tutorial before the conference itself, a Conference Preview webinar, or something else–we included a call to join the machine learning community at Microsoft. And sure enough, during the weeks before the event, we welcomed hundreds of people to the machine learning community.

I think that putting effort into creating valuable content, and then pairing that content with a call to action to join the community, is so much more effective than a simple request to people to join your community. The fact that you create original content shows your own commitment as community sponsors, and it also gives potential members a sense for the value they will get if they join the community.

5. The metaphor of the conductor and the orchestra really does make sense. We started work on the conference in January, and it was daunting. There was so much I didn’t know, and I had no idea how we would get it done! Now it’s six months later, and I still don’t know how to do so much of what it takes to put on an event of this size. But I’ve come to peace with the fact that I may never be able evaluate a strongly technical machine learning proposal, I can’t find a math error in a data science presentation, and I have no idea how to estimate how much food to order for 1,700 people.

What I can do is conduct the overall experience–that is, make sure that I know people who can do those things well, that I have recruited them to take part, and that they are motivated to do so, understand what’s expected of them, have the information they need to do the work, and feel like they’re getting recognized and rewarded in the ways that they want. Being able to orchestrate all of their individual talents so that they work together seamlessly to make this big event a great experience for our attendees is classic community manager work, and it’s something that I’m going to strive to do even better at our next conference–which is only six months away! 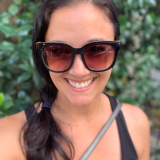